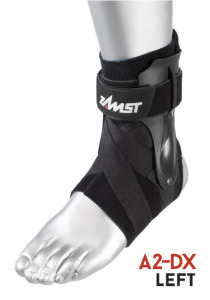 Anyone who has played basketball knows how much stress the game puts on one’s ankles. You can break your ankle by merely landing on another player’s foot after shooting a jump shot. For the Golden State Warriors’ star point guard, Stephen Curry, these ankle ailments are all too real. Curry has suffered numerous ankle injuries and endured through multiple surgeries. Yet he’s still driving the lane and draining three pointers thanks to his Zamst A2-DX ankle brace.

Curry was relatively healthy during his college career at Davidson. He only missed one game due to a rolled ankle. This ankle has since plagued him for the duration of his short NBA career. He’s even suffered sprains and twists with his left ankle as well.

Early on in Curry’s career, it was clear that the young point guard was a budding star. He just needed to stay on the court to prove that he belonged among the game’s greats. At one point it looked like the promising young point guard might have an abbreviated NBA career due to his ever troublesome ankles. That was until Zamst stepped up and provided Curry with their one of a kind Zamst A2-DX ankle brace.

Sign up for injury prevention and recovery tips from Zamst.

Zamst, an innovative protective equipment manufacturer, has been supporting Curry for three years. Zamst’s A2-DX ankle brace helps athletes prevent ankle injuries and also recover from them. Curry wore the A2-DX brace throughout the 2012-2013 and has worn it ever since. Once he began wearing the A2-DX ankle brace, his ankle was stabilized and he had the mental and physical confidence to put stress on it without hesitation. This reassurance cannot be understated. When athletes begin to second guess their natural moves and instincts, their performance suffers and they become shadows of their former selves.

Zamst has been in the brace business since 1992. The company knows how to precisely engineer brace and support products that are light and subtle enough to not interfere with athletic performance. Each is built with high performance materials, superior construction and an anatomically correct design. Curry’s ankle brace is the result of a time consuming and expensive development process. The Zamst team consulted with medical professionals, Physical Therapists, Orthopedic Surgeons and athletes to build this one of a kind brace.

Armed with the unique input of some of the world’s best athletes, trainers and doctors, Zamst created the EXO-Grid guards. These are fundamental to the A2-DX’s success. EXO-Grid guards are quite rigid barriers that restrict inversion and eversion ankle sprains. They are used in combination with Zamst’s X-straps that increase medial, lateral and anterior stability. These technologies combine to offer unparalleled support for athletes ankles. Since it is built with a rear entry design, the A2-DX ankle brace allows each athlete to customize its fit to the unique shape and dimensions of his ankles.

Curry has praised his A2-DX brace, “The Zamst A2-DX is the only product that has given me the full confidence to play without the fear of re-injuring my ankle.”

This is the same ankle that ESPN analyst, Skip Bayless, once called a “tissue paper ankle” on his First Take television show. Bayless used to Curry the “new Bill Walton”. Walton’s career was cut short thanks to his injury plagued ankles that required fusion surgery upon retirement. At one point, Curry had missed 54 games over 4 NBA seasons and his basketball career was in doubt. Today, Curry is playing better than ever. His game is fully rejuvenated and much of the credit can be attributed to his Zamst A2-DX ankle brace.

The NBA MVP has injured his knee… so...

Do the Zamst A2 DX (the ones Stephen curry wear) come in white or can you make them in white?